With the UK out of the EU as a result of Brexit, it appears the blue passport is set to stage a comeback for the first time in March 2020 after 30 years to replace the current burgundy passports which was first introduced in 1988.
The issuance of the blue passport which will be introduced in phases from next month with the aim of ensuring a complete roll out by June 2020 is embossed in the back cover with the floral emblem of England, Northern Ireland Scotland and Wales. It is also expected to be the greenest British passport thus far as the carbon footprint which was produced through manufacture will be reduced to net zero, through projects such as planting trees. 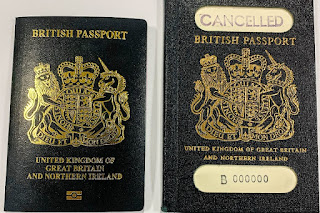 In a statement published today by the Home Office Secretary, she said:
“Leaving the European Union gave us a unique opportunity to restore our national identity and forge a new path in the world.
By returning to the iconic blue and gold design, the British passport will once again be entwined with our national identity and I cannot wait to travel on one.
The new passport will also be the most technologically advanced British passport ever, with a raft of new and updated security features, including a hard-wearing, super-strength polycarbonate data page, which contains innovative technologies embedded into the document, to keep personal data secure.
It also includes the latest and most secure printing and design techniques, which mean it offers better protection against identity theft and fraud and will be even harder to forge.
The blue cover is a return to the original appearance of the British passport, with the colour first used in 1921.
It remained the colour of choice until the UK joined the EU when a change to burgundy was agreed and adopted.
All British passports will continue to be personalised with the holder’s personal details and photograph in the United Kingdom, ensuring no personal data leaves the country.
Standard passports will continue to contain 34 pages. Frequent traveller ‘Jumbo’ passports will now contain 54 pages.
Those with valid, burgundy passports can continue to use their passport for travel until it expires.”